DISCOVER THE PLEASURE
OF WATER

Heated pools and water games . Swim in 700m² of heated water and give yourself that ‘feel good’ feeling. This is available to all ages from the little ones to the more mature adults from April to September.

the heated pools of the campsite:

Let’s enjoy the fun, day by day, from April through to September in the heated swimming pools at Camping Le Dauphin. 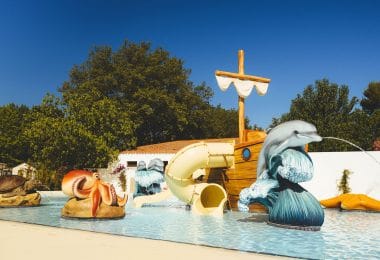 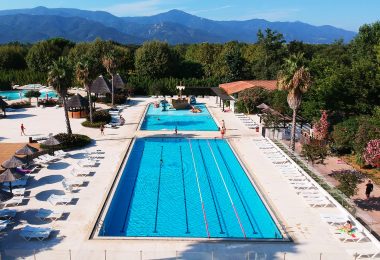 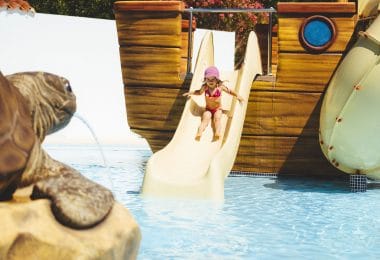 The story of Vicky, the little Dolphin

Once upon a time there was a little dolphin. He spent his days having fun in the sea, doing pirouettes, twirling around, leaping from wave to wave. The bubbles stroked his flipper and he just loved that! He liked watching the fish and rubbing up against the star fish which tickled him; the beauty of the sea life fascinated him.

He was a very happy dolphin when he was with his family, his Daddy, his Mummy, his brothers and sisters and they had races in the water. He was as quick as lightning and always won the races.

The little dolphin knew what he could do to help. He put on a show doing daring jumps, somersaults backwards and forwards. He called out and cheered. Seeing the dolphin, the man began to smile and then said:

“Hello, I’m Rodrigue, great show. Thanks! That’s cheered me up. You see, my crew and I are lost and we are afraid of being caught by pirates. Maybe you could help me. We are looking for the Palm Island? Do you know where it is?”

The little dolphin flicked his tail up to show that they should follow the direction he was going to get to the island. Then he threw himself in front of the boat and began to swim. Rodrigue was very happy and gave the order to his crew to ‘up anchor’ and follow the dolphin.

Several hours later, an island appeared on the horizon. They stopped the boat and Rodrigue came to the edge:

“Thank you so much; I will never forget what you did for us. We were lost and you saved us. Thank you! I will call you ‘Vicky’. Come and see me whenever you want. We are going to live on that island.”

Vicky, leapt out of the water and did lots of jumps to show how happy she was. Rodrigue was just as happy. A lovely new friendship had been born.

From then on, Vicky, the little dolphin, often visited his best friend. They play together under the water, Rodrigue catches hold of his flipper and they swim surrounded by thousands of bubbles which tickle and stroke their faces.

« When Vicky is not with his friend, he spends time with other friends he has made at Camping Le Dauphin. If you want to see him and become another of his friends, you can »